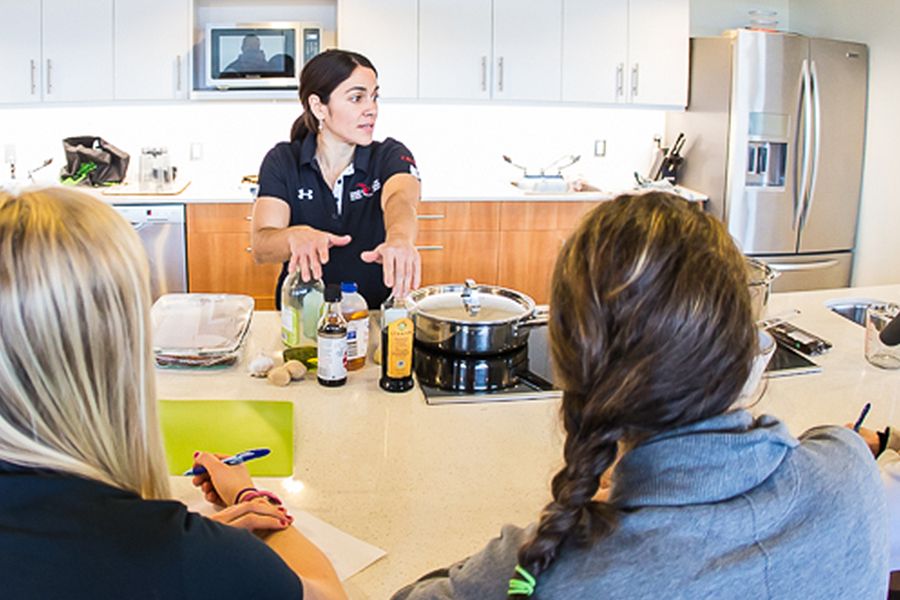 Many of the Canadian Sport Institute Calgary's (CSIC) specialists have had the privilege of being recognized as national leaders within their respective fields. This list includes Registered Dietitian Kelly Drager, who recently spent time in Montreal sharing her research findings with other sports experts from around the country.

Drager presented in Montreal after being asked by Own the Podium to facilitate two different sessions at the Montreal Sport Innovation (SPIN) Summit 2014. The Montreal symposium was the 9th annual conference put on by Own the Podium, whose conferences have the goal of "developing and networking in the areas of applied sport science, sport medicine, and sport innovation."

Drager was enthusiastic about the opportunity to share her knowledge at the conference, believing that "SPIN is a great opportunity to connect in person with colleagues and other sport science disciplines. The collaborative candid conversations are often what initiates the creative thinking process, leading to future projects that will further the development of athletes to the highest level possible."

One of the topics that Drager shared her knowledge about was the concept of Relative Energy Deficiency for Sport (RED-S). RED-S is a syndrome that refers to impaired physiological function including metabolic rate, menstrual function, bone health, immunity, protein synthesis, and cardiovascular health. Along with the interdisciplinary panel of fellow specialists Shaunna Taylor, Trent Stellingwerff, and Adrienne Leslie-Toogood, Drager presented on RED-S and its implications for all coaches and Integrated Support Team members (IST). The group also introduced implications and strategies for paramedical staff, sport scientists, coaches and sport leaders who are looking to improve performance while maintaining athlete health.

The second facilitation Drager was asked to lead was titled Weight Management Consideration for Athletes. Drager's main goal for the session was to facilitate discussion for determining appropriate weight and body composition for athletes. This is a key consideration for IST members, as often managing weight is necessary for performance and body composition demands are extremely sport specific. Drager addressed issues such as how weight and body composition targets are determined for athletes, key components that should be considered when assessing if an athlete is at an appropriate weight, and what the best approaches to achieve desired changes for an athlete are.

Drager's work at the CSIC has provided her with the incredible opportunity to further her professional development while working with teams such as the National Wrestling Team and Bobsleigh Skeleton Canada. At the SPIN conference, she was able to share knowledge gained through her work with CSIC teams during one of her workshops by presenting a case study on the consequences of health and performance which reviewed current evidence based approaches to effectively facilitate fat loss while maintaining or gaining lean tissue in the athletic population. The combination of being able to elevate athletes' performances while also making progress within the ever-evolving field of nutrition is a benefit that Drager knows is enabled by the leaders of the CSIC who are always striving to be a step ahead of the international competition.

Drager recognizes that the environment created at the CSIC has helped her, along with other IST members, stay ahead of the curve when it comes to research. She acknowledges that, "At CSIC we have the ability to directly interact with the athletes on a daily basis as well as the other sport science members of the IST. Seeing the athletes train maximally everyday is motivating, creates a sense of national pride and definitely encourages everyone working within the team to do the best to foster excellence."