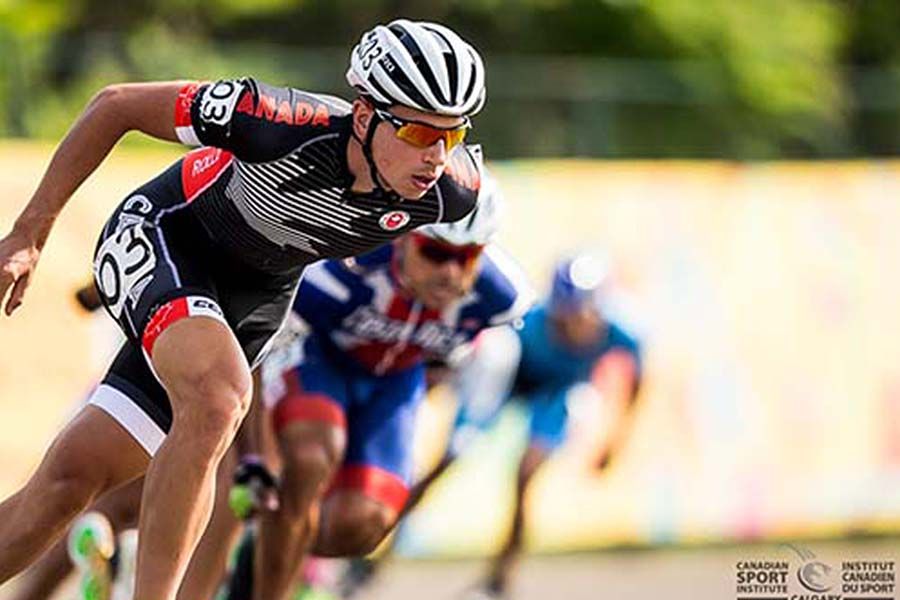 The Canadian Sport Institute Calgary (CSIC) athletes are making their mark on the PanAm Games in Toronto. As of July 16, half of the way through the competition, Team Canada is leading the medal standings with a total of 97 medals.

As expected, CSIC athletes have been great contributors to the results. Gold medal performances have come from Ashley Steacy in rugby, Monique Sullivan and Kate O’Brien in track cycling’s team sprint, Genevieve Morrison in 48kg wrestling, and a double gold medal performance by Lynda Kiejko in shooting. Silver medals have been won by gymnast Kevin Lytwyn on the horizontal bar and Andrew Schnell in doubles squash. The medal haul so far is rounded out with bronze medals earned by the men’s water polo team and roller speed skating’s Jordan Belchos .

Belchos is a rare two-sport athlete, who competes during the winter months in international events in long track speed skating. Belchos, a native of Toronto, was ecstatic with his performance in the 10,000m points race, saying, “It was such an honour to compete in my hometown. Travelling to and from the venues I passed by the rink where I had my first speed skating race and by the hospital where I was born. It really made things feel like they were coming full circle for me. I knew my Pan Am race would be a once in a lifetime opportunity and I knew I was a long shot to win a medal but I never wavered in my belief that I could do something special in the race.”

Belchos has been living in Calgary for a decade and attributes much of his athletic success to his training environment, noting, “I'm privileged to be supported by the CSIC and train in the professional setting and environment that they provide. So many of the steps I've taken in my career have been under the guidance of many CSIC staff including Derek Robinson, Scott Maw, and Kelly Anne Erdman.”

With many events still to be contested, be sure to keep an eye on the rest of the CSIC athletes and all of Team Canada!