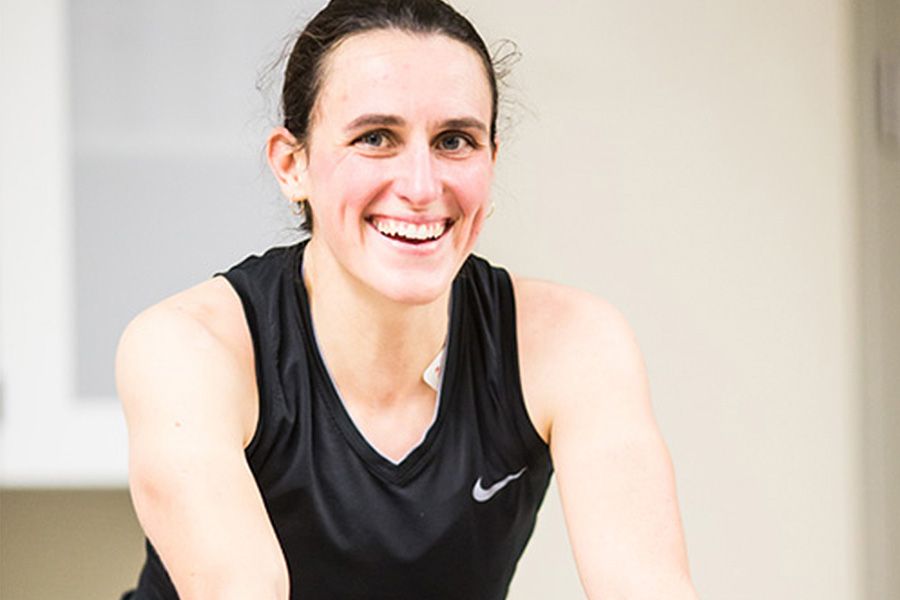 Not many Olympic medalists have a Ph.D. in neuroscience, but Dr. Tara Whitten is an exception. The CSI Calgary athlete and 2012 Olympic bronze medalist in track cycling became fascinated with the human brain upon reading a book on the topic in high school. She came away with the sense that neuroscience is a field where a lot of unsolved mysteries remain. Her new passion for the brain nurtured a desire to help solve these mysteries.

Years later, as Whitten was finishing her Ph.D., which focused on studying electrophysiology in the hippocampus (a part of the brain that is important in learning and memory), she was trying to think of how she could bridge the gap between neuroscience and sport – her two passions in life. “I thought there might be a way to combine the two,” she says. “In the end I thought concussion would be a perfect fit.”

But first there was the little matter of chasing her final Olympic dream. For 2016, Whitten chose to focus on the individual time trial in cycling and became a legitimate medal contender. Improbably, in March, during her final preparations leading up to the Games she suffered a debilitating neck injury from a crash during a training ride on the course in Rio.

At first, Whitten’s recovery was uncertain and unpredictable – she had a concussion and broken bone at the base of her skull. This uncertainty led to thoughts about the future. “I was still recovering from my accident in Rio and I wasn’t really sure how things would go,” she says. “In that situation I was thinking a lot about what I was going to do.”

In the end, she pushed through a remarkable recovery and finished an impressive seventh place in Rio. Despite good feelings about her performance, she still laments that she could have done better, but she will have no time to dwell on the past – a new challenge awaits.

Dr. Brian Benson is the Chief Medical Officer and Director of Sport Medicine at the CSI Calgary and has a clinical consulting practice in Sport Medicine at the WinSport Medicine Clinic with a special interest in acute sport concussion. He was Whitten’s physician during her recovery, but now he’ll be her co-supervisor as she begins working as a postdoctoral fellow in his concussion research group.

Despite having a concussion herself and being under the care of Dr. Benson, Whitten came across the job posting honestly – an internet search for a postdoctoral position in Calgary in concussion research. “I was still wearing the neck brace during the interview,” she laughs.

The two-year position is jointly funded by Own the Podium and Mitacs, a national, not-for-profit funding organization. Whitten’s work will focus primarily on measuring and assessing visual impairments in concussion patients. Using robotic technology developed by Dr. Benson, Whitten will develop a task to measure oculomotor function, which will expand the existing capabilities of the diagnostic tool.

According to Dr. Benson, there is currently no task or program available to measure oculomotor function in concussion patients. “Tara will be breaking new ground with her research.” He says vision problems are common in concussion patients, such as difficulty focusing, which can lead to dizziness, but are difficult to assess in a clinical setting. Whitten’s research will help remove the subjective component of assessing and monitoring concussions and when an athlete is ready to return to play.

Whitten wasn’t able to benefit from this testing herself during her injury, something she thinks could have helped her recovery. “There was a window of time when I thought I was 100% but every once in a while something would happen that made me question that,” she says. “Having this test would have helped me know if I was fully recovered or not.”

Her unique background as an athlete and neuroscientist, as well as her recent experience with a concussion injury, made her the ideal candidate to join Dr. Benson’s team. “She brings a high performance perspective, a neuroscience degree and training in programming and analysis,” says Dr. Benson. “She is the perfect fit for our concussion program.”

For Whitten, it feels strange how everything came together. Ph.D., Olympian and concussion, all converging at a time and place that feels right as she transitions away from life as an athlete. “I feel very lucky to have something to focus on. I feel that there are a lot of possibilities and I’m excited about it now.”