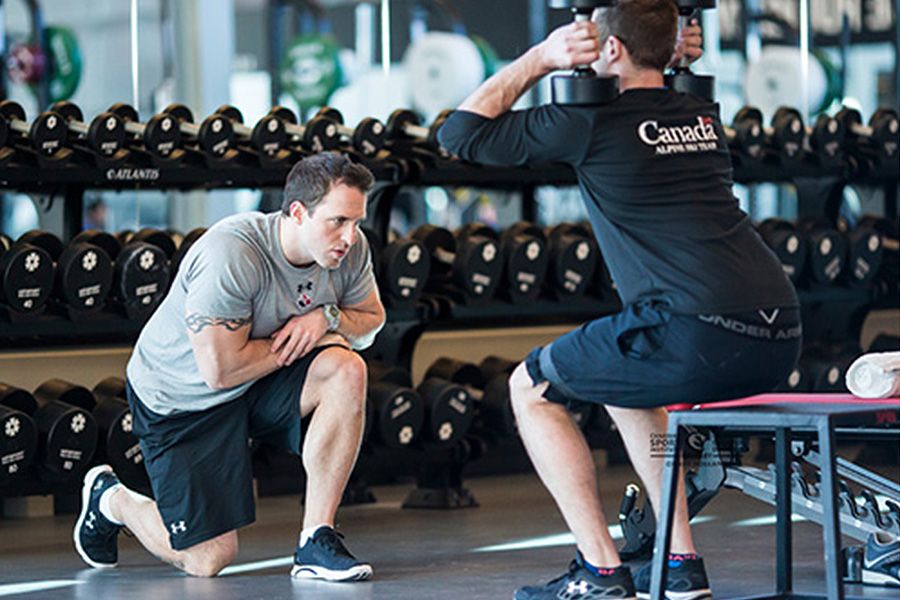 Dustin Cook wasn’t sure he would remember how to ski. But after nearly a year off snow – his longest break since he took up the sport at age two – Cook patiently and doggedly worked to recover from a catastrophic knee injury. He was pleased, and relieved, to discover that he certainly does remember how to ski.

“It feels amazing to be back on snow,” he says. “I wasn’t sure what to expect but it couldn’t have gone any better. I was a bit surprised. I was kind of assuming the worst, but everything went awesome.”

Coming off a recent two-week training camp in Chile, Cook is looking forward to a return to racing this fall. And so he should be – eight years of persistent and consistent racing on the World Cup circuit led to a breakout season in 2014-2015 that saw Cook win a World Championship silver medal in the super-G and gold and bronze medals in subsequent World Cups.

He was well poised to maintain this momentum last season when calamity struck. During a training run in Austria, Cook crashed and sustained torn anterior cruciate and medial collateral ligaments (ACL & MCL) in his right knee. His season was over before it started, he flew home to have reconstructive surgery and start a new journey – the long, painful and challenging road back to racing.

Patience and hard work helped him recover, but he didn’t do it alone. His support team at Alpine Canada Alpin and the CSI Calgary built a plan for every stage of Cook’s recovery. Jamie McCartney is the Strength and Power Coach at the CSI Calgary for the men’s Alpine ski team. He was instrumental in both planning and facilitating Cook’s rehabilitation.

“Once an athlete gets injured he becomes his own team, now we have a specific focus on that individual and the work flow becomes about getting that athlete into the proper care,” says McCartney. He adds, “We build a plan around the medical timelines we are given and adjust the protocol from that point on. It’s a concerted effort by the entire Integrated Service Team.”

In the early stages, the process is about recovery from surgery, then rehabilitation starts. This eventually crosses into pre-habilitation, where strength and conditioning can begin. The timeframe varies for each athlete depending on how recovery progresses.

Part of Cook’s recovery incorporated the use of functional testing in the CSI Calgary’s strength lab to identify deficits in strength and muscle stability. According to McCartney, jump testing using force plates is a performance marker that shows bilateral asymmetry between the injured knee and good knee. “With catastrophic injury we can see asymmetry of up to 40-50%. We are always going back to reassess whether the athlete is tracking back towards baseline results [on the injured knee].”

McCartney also works with the physiotherapist to design an appropriate training program to address the injured knee. The task can be daunting given the deficits they see. “Usually with an ACL injury the quadriceps muscles atrophy, there is scar tissue and the gluts are inactive. The body needs to be retrained to move and to rehabilitate lost movement patterns.”

Although it can be overwhelming for an athlete to endure a year-long rehabilitation program, there is potential for a silver lining. “With all the time I had to recover we made a plan to fill a gap in my training – I was able to work on improving my core strength, which I felt could be better,” says Cook. He feels stronger now than he’s ever been.

McCartney attests that he’s never seen someone be as professionally committed and focused on doing the rehab as Dustin Cook. “It was his number one priority. He trusted his team around him and did what he needed to do.” Cook is modest about his progress, “There was no magic formula to getting back,” he says. “It was just having a good team around me and doing the work.”

As it is with elite athletes, everything Cook has learned during his long journey to the top is not easily forgotten, the least of which is skiing. How to perform, how to win – that is what Dustin remembers most and it helped get him through a long year of rehabilitation. “There has never been a doubt in my mind that I could get back. I worked so hard to get there and I didn’t forget that.”