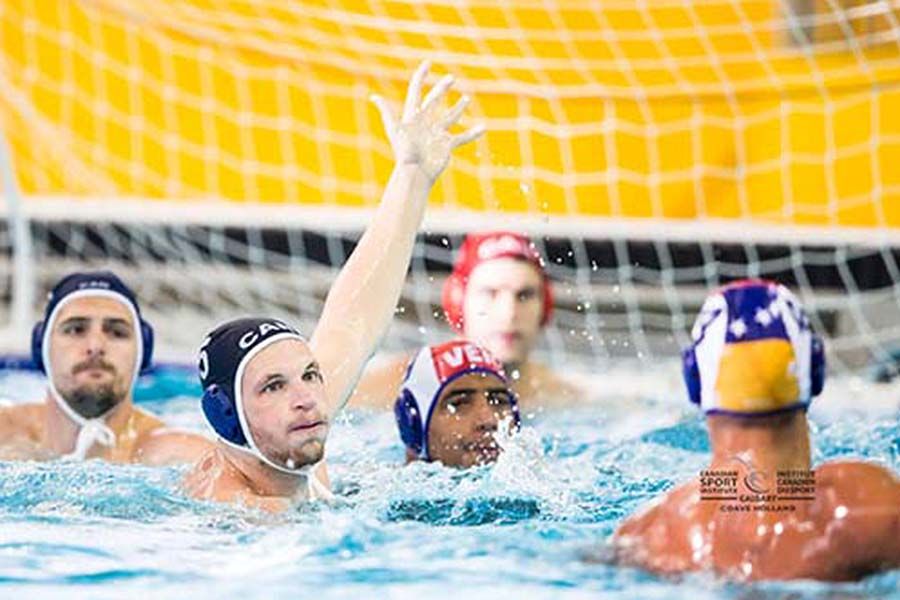 Sometimes small changes can make a big difference. For the Canadian men’s water polo team the change was simple – move two of ten weekly sessions from their usual training centre, to the CSI Calgary. It wasn’t until this strategy shift in the fall, along with a recent coaching change and collaboration with staff at the CSI Calgary, that the team’s eyes were opened to the benefits of the institute’s setting and services.

The impact on the team was dramatic. Long-time veteran and goaltender Robin Randall describes what changed for the team, “At our main venue there weren’t a lot of athletes around and we were a bit isolated, but at CSI Calgary we were able to interact with the other athletes and get to know them. It created a sense of Team Canada for us, in that we are all Team Canada”.

According to the team’s strength coach, Jeff Osadec, this modest change led to a palpable shift in team culture. “It changed the way they trained, they were now in an environment where they were surrounded by their peers from different sports and became a part of the CSI Calgary system and family.”

CSI Calgary staff worked closely with the team’s coaches and managers. Osadec’s focus was working on the basics. He says, “because water polo is a skill-based sport where there isn’t a lot of transfer from the gym to the pool, the emphasis was on getting the athletes fit, strong and able to recover.” It wasn’t long before everyone noticed a difference. Randall confirms that, “the work we did with Jeff helped give us more confidence in our strength, which translated to the pool in many ways, like having more stability on defence.”

A new training sequence was worked into the program by physiologist Dr. David Smith, and nutritionist Kelly Drager helped the men reach their needs of 5000-7000 calories a day. John Conway, an attacker, says “the level of expertise and professionalism in all sporting areas across CSI Calgary has given our team the tools we need to compete at an elite level.”

At the recent Olympic qualifying tournament in Trieste, Italy, the team fell devastatingly short of earning their ticket to Rio de Janeiro for the 2016 Olympics. Despite posting a comeback tie against Hungary in the preliminary stages – an unprecedented result that drew praise from other teams – a loss against Spain in the quarterfinals closed the book on this Olympic cycle. Conway sums up the disappointment that is still sinking in, “The difference in qualifying was one goal. As much of a heartbreak as that is, it can still be seen as a huge positive as we are within inches of qualifying for the Olympics.”

Even still, there is a bright outlook for the future. “This team is the best we’ve ever fielded” says Randall. “We’ve never had a team of this quality before; it’s the greatest group of guys ever.” Adds Conway, “Our group has known for a while that we could do great things. Canada has been, and will continue to be, a top contending team in the sport of water polo.”