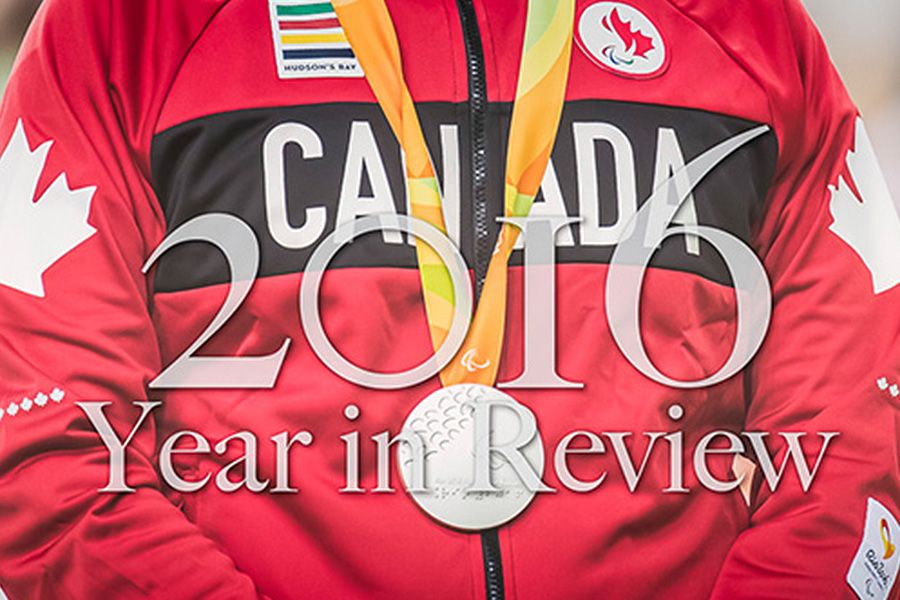 Although there were many great stories to choose from, below are a selection of human interest and performance stories coming out of CSI Calgary:

In a Paralympic sport typically dominated by older athletes in their thirties and even forties, this 20-year old cyclist has risen through the ranks quickly, winning a bronze in the Individual Time Trial at the 2016 Paralympic Games. His first international podium result came at the 2015 ParaPan Am Games with a silver medal, which led to his first ever World Cup medal, a bronze at a 2016 World Cup in Belgium.

4. Tara Whitten Overcomes All Odds with an Amazing Recovery and Performance in Rio

After a serious and bizarre crash on her bike during a ride in Rio at a training camp in March, Whitten made a remarkable recovery from a concussion and a broken bone in her neck. Whitten was able to train on an adapted bike, designed and built by a CSI Calgary exercise physiologist allowing her to ride in an upright position to protect her neck. Over a 10-week period Whitten was able to build up her endurance enabling her to compete successfully one week after her brace came off. Several weeks later she dominated the National Championships and qualified for Rio. Whitten placed 7th in the Individual Time Trial – a fantastic result by an athlete who persevered through injury with fierce determination.

Blondin originally started out in short track speed skating, honing her ability to skate in a pack. This experience has served her well in a new long track speed skating event that is now on the Olympic program – the Mass start. She beat her Dutch rival, Irene Schouten, at the World Single Distance Championships, bringing home the gold medal. Blondin is skating successfully again this fall, with two gold and a silver to date in the ladies Mass start.

Transplanted Dutchman, now Canadian, Ted Jan Bloemen has been a boon to the men’s long track speed skating team. In 2015 he broke his former countryman, Sven Kramer’s, longstanding world record in the 10,000m by almost five seconds. For his efforts, Bloemen won the 2016 Oscar Mathisen Award for the most outstanding speed skating performance of the season worldwide. He is the 5th Canadian to win the award in 57 years. Bloemen has continued to lead the men’s distance team, winning silver in the 10,000m and bronze in the Team Pursuit at the 2016 World Single Distance Championships.

1. Wiebe Wrestles her Heart Out

One of the most enduring images of a Canadian athlete from the 2016 Olympic Games in Rio is that of Erica Wiebe, standing atop the Olympic podium with a gold medal around her neck, singing Oh Canada, tears streaming unabashedly down her face. The gold medal performance by Wiebe was an outstanding example of preparation, execution and confidence. Always one to wear her heart on her sleeve, Wiebe’s performance was dominating and inspiring.

Other Noteworthy Stories from the CSI Calgary:

• Comeback from Injury: Two notable athletes that are making a comeback for the 2016-2017 winter season are alpine skier Dustin Cook, who tore his ACL/MCL in 2015 and speed skater Denny Morrison, who narrowly survived a motorcycle crash in 2015 and a stroke in 2016.

• Talent Transfer: Kate O’Brien and Kirsti Lay both transferred into cycling from other sports, both qualified for Rio Summer Olympics with Kirsti winning a Bronze medal in the Team Pursuit.

• Education: Strength and Power Performance Course delivered in May.

• Practicum and Internship: CSI Calgary supported 13 practicum students and one internship position, working to integrate CSI Calgary knowledge and experience, teaching students, coaches and sport science professionals in the fields of Strength and Conditioning, Sport Science, Biomechanics and Nutrition, to help put Canadians on the podium.