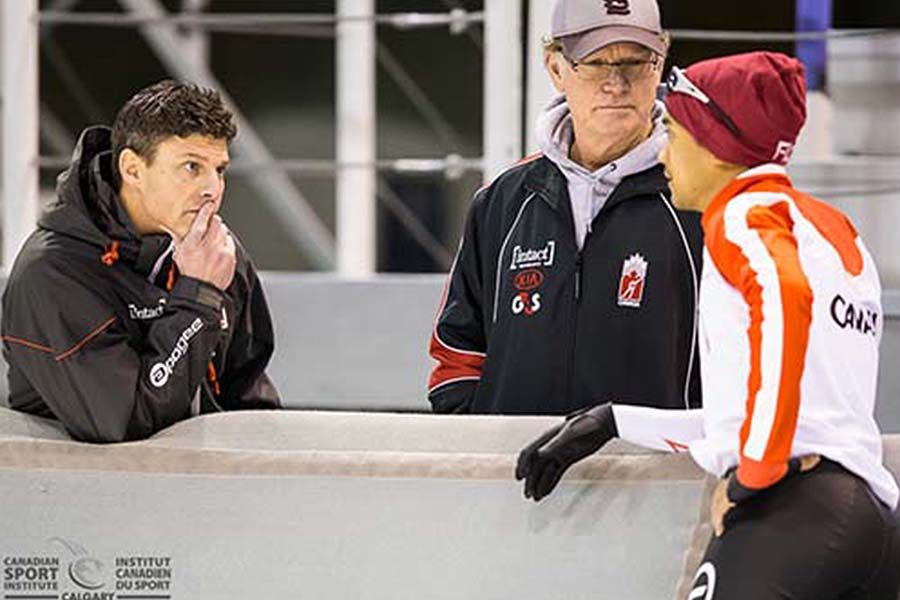 The Canadian Long Track Speed Skating Team is doing extraordinary things, both on and off the ice. Recently wrapping up a breakthrough season for many athletes, the team has found a formula for success.

Canadian Sport Institute Calgary Mental Performance Consultant Derek Robinson has been a catalyst for the new team culture. Among a number of new ideas, Robinson implemented a new team custom which has athletes sign the Canadian flag when they qualify for a racing team. The athletes then have a second signing ceremony if they win an international medal.

Robinson, who works with teams including Speed Skating Canada, Alpine Canada and Hockey Canada says, “One of the great things about the CSI Calgary is how they foster personal development. The CSI Calgary encourages its staff to work with established industry leaders, coaches, and support staff. I have learned more about the psychology of performance from working with people who truly understand what it takes to win the right way than I ever did in graduate school.”

What prompted Robinson to create this unique tradition? He believes, “The psychology of performance is about the team culture. In reality, to compete against the best in the world under pressure you must be a team. You cannot do it by yourself. The challenge is how do we become a unified team? It starts with knowing the values that drive our culture and the foundation of what we are about and how we do things. The Canadian flag is signed by members of this team because there is deep personal meaning for our athletes to compete for Canada. It is the identity of the team that matters.”

One of Speed Skating Canada’s new stars, Heather McLean, took the world by storm this season winning four World Cup medals. Of the flag signing ritual, she says, “It's such a unique and Canadian tradition! I am inspired by the flag ceremony because I am so focused on my own races during the competition that I lose track of the bigger picture and the flag signing always brings it back. I love to observe and learn from other elite athletes and hearing what they have to say about their performances is really inspiring.”

As the team’s custom proves, talk is trivial unless it is backed by a strong belief and daily embodiment of the ideals. Robinson emphasizes, “Unless you are in the room with these people, you can not really appreciate what these words are saying, let alone the passion and emotional experience of the athlete who signs the flag.”