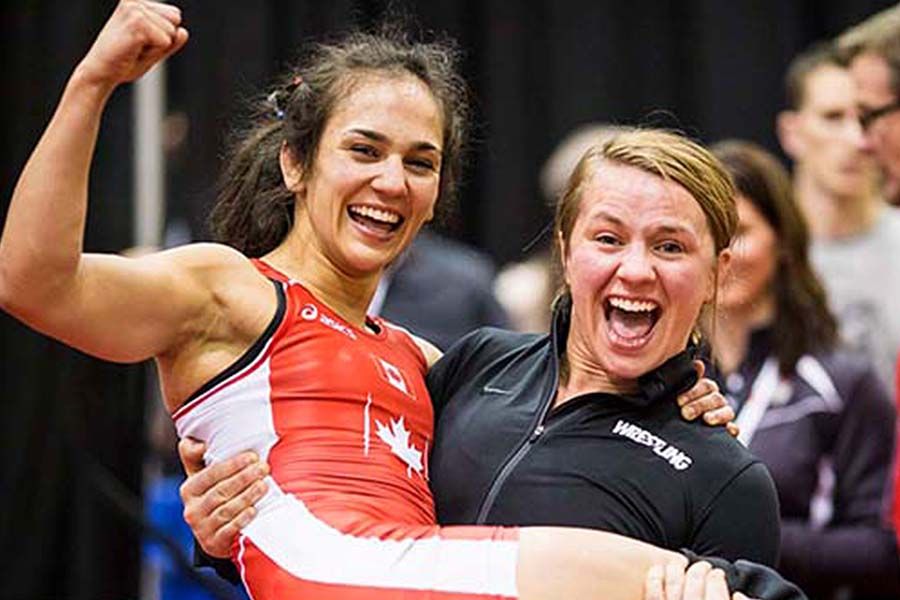 The athletes and their support team were at WinSport from January 4-8 for their Olympic kick-off training camp with the goal of building their Olympic performance plan. Athletes first went through medical evaluations led by Dr. Katie MacGregor followed by strength, physiological and nutritional assessments at the Canadian Sport Institute Calgary (CSI Calgary). This was to determine their preparation state and identify where improvements are needed leading into the Games.

Head Wrestling Coach for the Olympic Games Leigh Vierling also used the camp to work with his athletes on a Key Opponent Analysis. Strength and Conditioning Coach Mac Read saw extreme value in the camp format because, “Normally the wrestling camps have up to 40 athletes. We had seven female athletes allowing for much more individual attention and focus. They also worked together to build a strong team atmosphere.”

Physiologist Erin Sargent worked with the athletes on their cardiovascular conditioning to ensure that they can sustain high intensity throughout a match. She notes that this will also “help improve their ability to recover between matches as the athletes can have up to six or seven matches in one day.”

Under the direction of Wrestling Canada, Registered Dietitian Kelly Drager examined all aspects of the recovery and weight cutting processes that wrestlers need to perform before every major competition.

Jasmine Mian, a 48-kilogram wrestler, enthused, “The camp was a great way to kick off the new year. We were able to see how far we have come and formulate a plan to get where we need to be. I am pushing myself to be ready for Rio, but I also see how hard the staff at the CSI Calgary are working to make sure we are ready. It gives me a lot of confidence heading into the Games because even though wrestling is an individual sport, I have a whole team supporting me. The culture of excellence has been integral to my success both on and off the mat.”

75-kilogram wrestler Erica Wiebe emphasizes the sentiments of Mian, noting, “Every year the team becomes more efficient at collaborating so that our performance on the mat becomes a direct result of the work that we put in on a daily basis. They really embody what it means to work as a cohesive team. I know I am in good hands.”

A veteran of four Olympic Games, Coach Vierling is confident the kick-off camp was a success, saying, “I believe we have created outstanding practices in preparing our athletes for Olympic success. ‬‪Our team is young, keen, and ready to commit to the work ahead! ‬”‬‬‬