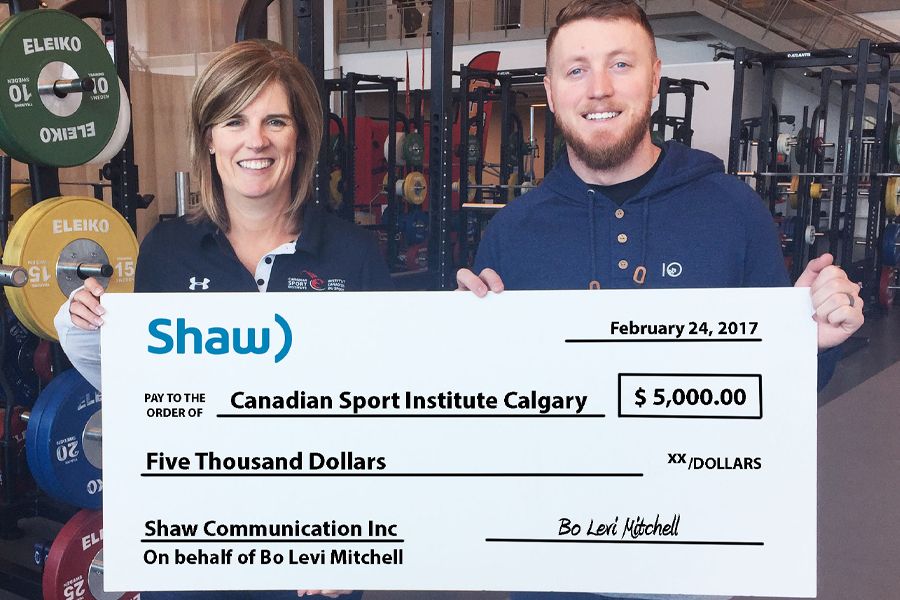 Bo Levi Mitchell is no stranger to fast-paced high-risk sport, and the injuries that can result from them. When injuries happen, return to play is the primary focus. Professional athletes have access to top-of-the-line para medical treatments, but this is not always the case for other high performance athletes. This is where Mitchell has decided to lend his support – to CSI Calgary Next Gen athletes in high risk mountain sports.

The Calgary Stampeders quarterback joined the elite club of Canadian Football League athletes last year when he received the 2016 Most Outstanding Player award and was recognized as Shaw’s CFL Top Performer for 2016. As part of the program, Mitchell was given $25,000 from Shaw Communications to donate to his charities of choice. Mitchell decided he would like to play a part in helping younger athletes receive pre-injury baseline assessments and post injury treatment. “I know the expertise required to bring an athlete back to their sport after injury and I’d like to be able to help them move forward to pursue their dreams.” Concussion and knee injuries are two of the rehabilitation areas in which he is most interested.

With football’s potential for acute unforeseeable injuries, Mitchell knows what it takes to fully recover. He has chosen to invest in Next Gen athletes because he sees their aspirations and knows the impact he can make by increasing their access to resources. “I’m mesmerized by the guts and athleticism in these young athletes in sports like Ski Cross, Freestyle, Slopestyle and Alpine skiing,” says Mitchell. “I have a ton of respect for them as I watch their speed and the elements they battle in their sports.”

“We are so appreciative that Bo Levi has chosen to support these Next Gen athletes in their quest to reach the next level,” says Dale Henwood, CSI Calgary President and CEO. “Injuries can prove to be a costly venture when working towards return to sport. This donation will make a difference.” Some of the services CSI Calgary can provide athletes include baseline testing, physiotherapy, expedited MRIs, concussion tools and proper muscular skeletal assessments.

Originally from Katy, Texas, Mitchell and his wife have been in Calgary since 2012. Active members in the Calgary community, they are involved with many charitable causes in Calgary and Southern Alberta. True role models, the Mitchells take pride in giving back. Among their initiatives to improve our community, they work with YouthLink, Big Brothers Big Sisters, Police Recreational Youth Mentoring Experience, and Vecova Centre for Disability Services and Research. Mitchell also hosts 10-15 kids at every home game through Bo’s QB Club.

Last November Mitchell was also awarded the Herm Harrison Memorial Award for the second straight year, given to a Calgary Stampeders player who distinguishes himself in the field of community service.

CSI Calgary thanks Bo Levi Mitchell for his generosity and would also like to congratulate the Mitchell family on the birth of their daughter last week.