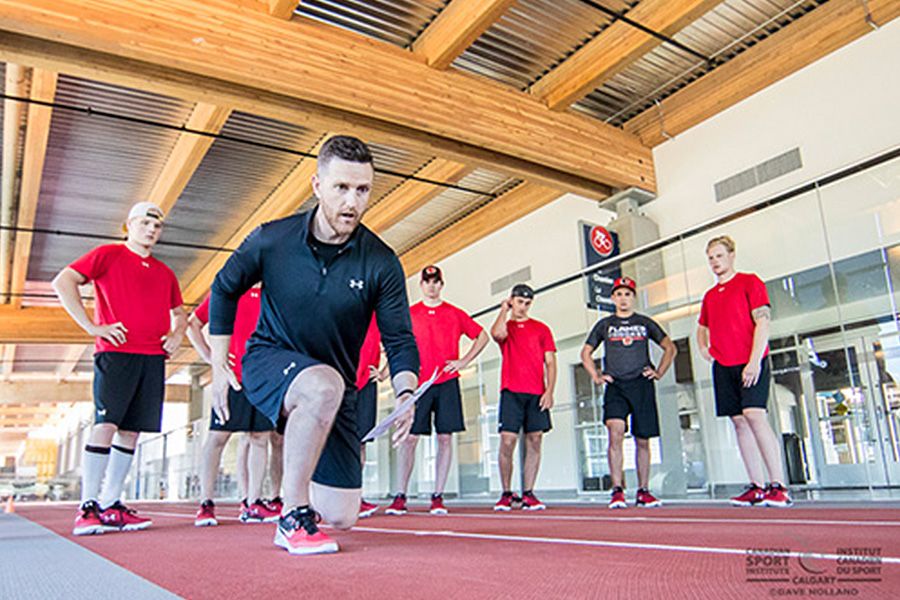 “Imparting knowledge is only lighting other men’s candles at our lamp without depriving ourselves of any flame” – Jane Porter, Scottish historical novelist.

Working alongside experts smarter than him is how Ryan Van Asten became an expert himself. Now the Strength and Conditioning Coach for the Calgary Flames, Van Asten got his start working in high performance sport at CSI Calgary.

The former Junior A and Queen’s University hockey player feels very fortunate that he had the opportunity to rub elbows with some of the best in the business early in his career, like Doc Smith, Steve Norris, Matt Jordan and Scott Maw – experts you don’t find just anywhere.

“At a regular gym you don’t have access to minds like that,” says Van Asten. “At CSI Calgary they think differently, they take a well-rounded approach and have a huge knowledge base. They knew so much more than I did at the time and I could bounce ideas off them to help me along.”

After four years working with Canada’s luge and women’s hockey teams, Van Asten was recruited to fill the strength and conditioning position with the LA Kings in the National Hockey League. In 2014, he moved back to Calgary to take on the same role with the Calgary Flames.

The leap to professional sport might seem like a big one, but Jason Poole, Director of Performance Services at CSI Calgary, says the skills that Van Asten learned while working at CSI Calgary prepared him well.

“What CSI Calgary brings is an opportunity to develop, learn and grow in the high-performance sport world,” explains Poole. “We taught him the skills he needed to be working with different sport organizations.” Such skills are highly sought after by professional sport organizations like the LA Kings and Calgary Flames.

It’s not just skilled professionals that CSI Calgary offers to the world of sport, but world-class testing, too. When it’s time to assess Calgary Flames prospects and players Van Asten says the lab at CSI Calgary is the only place he will bring his players. “It’s the best lab in Canada by far,” he declares.

Van Asten appreciates the technical precision employed across all testing because it ensures that the data is reliable. “Everything is perfectly calibrated and protocols are strictly followed,” he stresses. “It’s the same thing all the time, and that’s a good thing.”

Poole agrees, adding, “some of the biggest expertise we have is the assessment of athletes. We can use that data to adapt to the sport’s needs.” Poole says that is what sets the CSI Calgary apart – they are able to tailor what they do to each specific sport.

Driven by a desire to further his own knowledge and impart what he has learned throughout his own career to others so they can be better too, Van Asten is sincere and determined “My vision is to build a bigger program and use CSI Calgary as an example.”