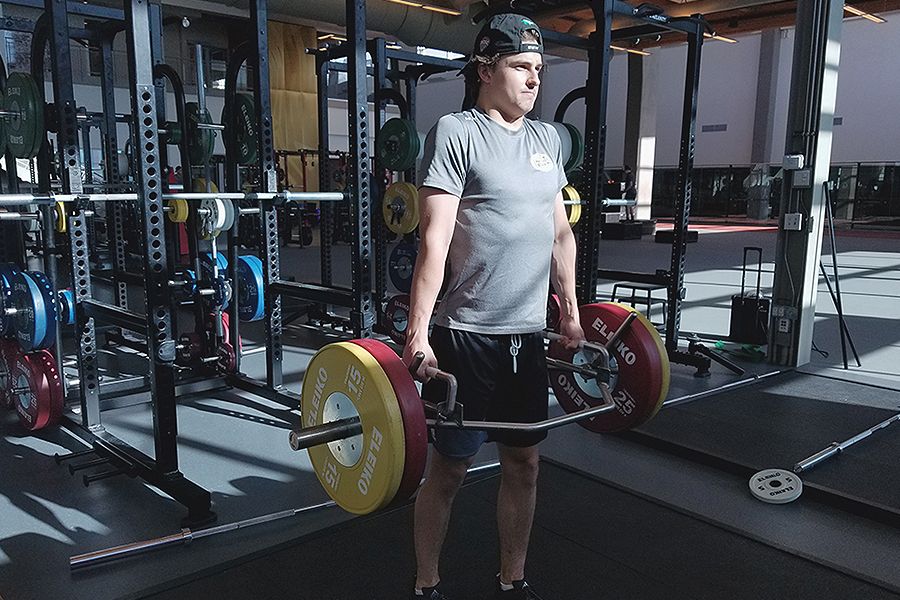 When Jonny Tychonick first started working with the Canadian Sport Institute Calgary (CSI Calgary) four years ago, it was under the condition that his homework be done before he could start training. The school work was always completed, and now Tychonick is beginning to reap the rewards of all that hard work.

At the 2018 NHL Entry Draft in June, Tychonick was selected 48th overall by the Ottawa Senators. It capped an exciting year for the puck-moving defenseman from Calgary. A year ago, he captured the Fred Page Cup with the Penticton Vees as winners of the BCHL. Then in December he represented Canada West, winning the World Junior A Challenge. Finally, in May he was officially welcomed to the University of North Dakota where he will play in the fall.

Tychonick’s association with CSI Calgary began while he was attending the National Sports School, mere steps away from the CSI Calgary facilities. Through a partnership between the school and CSI Calgary, Tychonick was able to train for one hour each day with strength and conditioning coach Jeff Osadec. This partnership worked well for Tychonick thanks to Osadec’s continual presence on the gym floor.

“I like how Jeff is right on us, with us all the time,” Tychonick says as he wipes away sweat from the workout he had just finished. “He’s not distracted by talking to somebody else. It’s really important for that kind of detailed stuff.

Last summer, Tychonick was joined by two other pro male hockey players at the CSI Calgary, Washington Capitals prospects Mason Mitchell and Tyler Lewington. Osadec believes the chance to work out with the older professionals was a great opportunity for the young Tychonick.

“He trained with the other two pro guys we have here, and they showed him how to work hard,” recalled Osadec. “I’ve never had an issue with his work ethic. Sometimes I actually have to pull the reins back on him.”

Osadec put an emphasis on preparing Tychonick for the 2018 NHL Scouting Combine this past June. At the combine, players go through an array of fitness tests while also being interviewed by interested teams. By the time the combine rolled around Tychonick knew exactly what numbers he would be posting on the fitness tests.

“The strength part, I knew I was ready and I was confident in myself,” Tychonick says. “It was just making sure that on the day I was ready to go, and I was focused.”

This confidence heading into the combine was something that Osadec believed helped the young man impress during his interviews.

“We prepped him for the combine, and the whole premise behind that was that he needs to be comfortable going into it so he can do the interviews well,” says Osadec. “You don’t need to be stressing out about what happens when you get there and how you’re interviewing. The testing should be easy, and you should know you’re ready for it.”

The work appeared to pay off as Tychonick finished with the best times in the entire draft class in the agility tests, and also earned a reputation as an extremely outgoing person after interviewing with 24 NHL teams. His straightforward and honest style was a breath of fresh air to many hockey fans. While Osadec was proud to see Tychonick drafted, for a member of the CSI Calgary team, this is just business as usual. “We do this with so many athletes on a daily basis,” says Osadec. “It’s not like we did something different with him. This is what we do.”

Tychonick heads off to the University of North Dakota in the fall, where more hockey and more homework await, but he doesn’t foresee this being his last summer at CSI Calgary.

“I know that CSI Calgary and Jeff have done amazing things for me, and I’ll keep coming back here to train. I have everything here.”