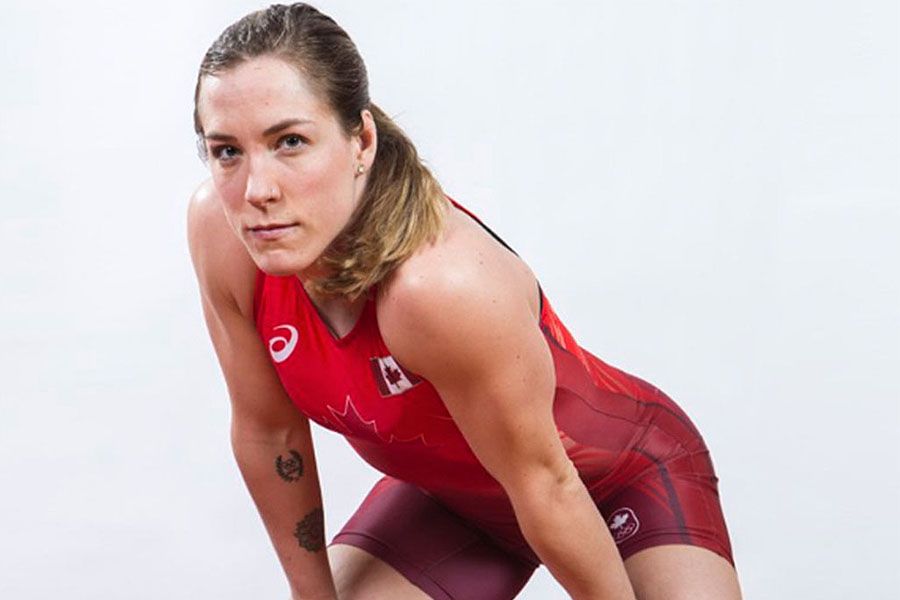 Danielle Lappage has endured a lot of heartache throughout her long wrestling career. Just after the 2014 World Championships, where she placed eighth, Lappage tore the ACL in her right knee, leading to reconstructive surgery and a long recovery. And then, just minutes before her opening match at the 2016 Olympics in Rio di Janiero, she ruptured a hamstring and had to withdraw.

In 2014 it seemed that Lappage was destined for greatness. That year, the 2010 World Junior Champion also won the national championships, World University Championships, Commonwealth Games and Austrian Ladies Open. Coming back from the ACL was a monumental accomplishment, but to have her dreams dashed by a freak injury in Rio was a lot to bear.

“I felt like I was living in a nightmare,” recalls Lappage, now 28. “I didn’t deal with it right away, it was a long coping process.” The rarity of her injury made the prognosis and long-term outcome unclear, and Lappage didn’t know what to do. A combination of coaching at Simon Fraser University and starting law school in at the University of Calgary in 2017 helped her navigate her recovery and the road back to competition, something she wasn’t sure would ever happen.

Now, against the odds, Lappage is preparing for the upcoming World Championships in Budapest, Hungary, alongside Olympic Champion and CSI Calgary athlete, Erica Wiebe. Of her recovery and ability to compete again at the highest level, Lappage is incredibly grateful. “I’m just super thankful,” she says. “This is my third life in this sport and I’m very thankful for that. Lots of people don’t make it back.”

Lappage has emerged from her setbacks with a few scars, but also a higher level of maturity and wisdom that she didn’t have earlier in her career.

In a sport where being the right weight at the right time is critical, Lappage acknowledges that as a young wrestler she didn’t approach the task of ‘cutting weight’ the best way. Making a weight class is often addressed through a strategy of drastic dehydration prior to the weigh-in procedure for a competition, something that can impact performance, especially now that it occurs one to two hours before a match instead of the day before.

“I was never taught a healthy way to cut weight,” she says. “It would have been better to learn that earlier.” Now as a more mature athlete, Lappage is conscientious about nutrition and takes a healthier approach to cutting weight, thanks to working with CSI Calgary Performance Dietician, Kelly Drager. “As I got older and more mature I was not willing to do that to myself,” she says.

Drager has worked with Lappage and the senior women’s team for four years. At first, she took an observational approach to learn how the athletes felt about nutrition and worked to develop the rapport and trust required for them to buy-in to what she wanted to do.

One thing Drager worked on was simply trying to change the language – for example using the term ‘making weight’ instead of ‘cutting weight’ – and taking a more positive approach to the unique challenges that this aspect of the sport entails.

Once Drager had built a relationship with Lappage, they worked to devise a plan to establish optimal nutrition, both for day-to-day and competition preparation. Now, to make weight, Lappage follows an acute plan that manipulates variables that won’t impact performance or long-term health.

“The goal is to ensure optimal performance in the timeframe we have,” explains Drager. “We don’t want drastic fluctuations in things we can’t replenish fast enough, like hydration and muscle glycogen.”

Lappage says the new approach has made a big difference. “Kelly made me look at it more critically,” she explains. Now the task of ‘making weight’ has stretched out to several days and Lappage says she doesn’t notice the difference anymore. “I actually feel better.”

Despite her long career, this will only be Lappage’s second World Championships. Maybe now, given everything she has been through, she is destined to finally have her moment.

“I’m optimistic and excited,” she says. “It’s an amazing opportunity to go, but I also want to win and that’s a new feeling for me. I can’t wait to go!”