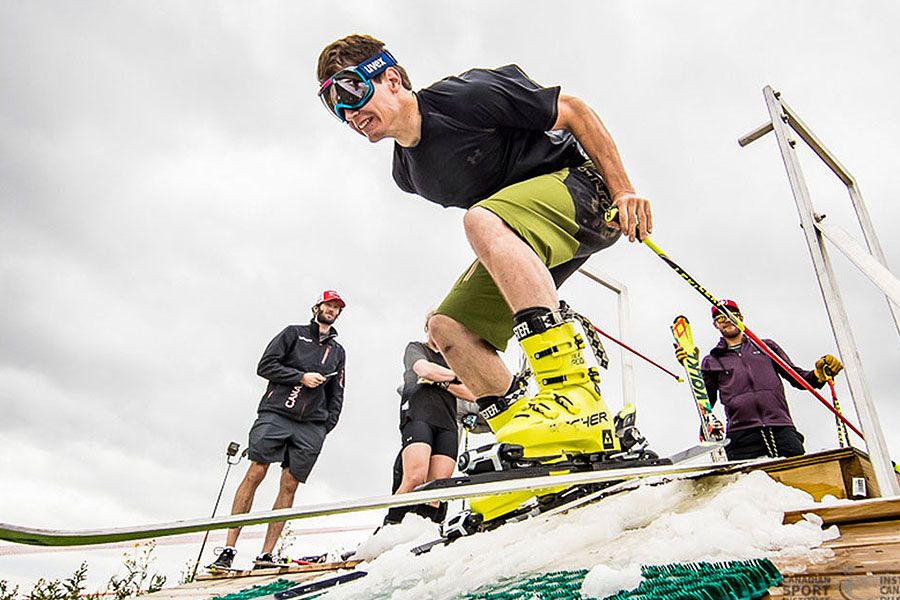 In the summer of 2017, Jeremiah Barnert drove truckloads of snow from the WinSport ice rinks to the top of the hill at Canada Olympic Park and piled it onto a homemade ramp made out of an old deck with a makeshift ski cross start gate built on top.

From there, some of Canada’s top alpine skiers were able to practice a different kind of start technique – one they will need to perfect for the team event, which is a new medal event in alpine skiing at the upcoming Olympic Winter Games in Pyeongchang, South Korea.

The team event is a parallel slalom competition where skiers compete head-to-head on a short slalom course with teams comprised of two men and two women. The start gate is not the same as in traditional alpine events, so Barnert, a CSI Calgary Head Strength & Conditioning Coach who works with luge and alpine skiing, was creative with available resources and his own expertise to ensure the athletes had what they needed to prepare.

The goal of the summer project was to create opportunities for the skiers to work on this new skill. They relied on Barnert to transfer his extensive knowledge of the luge start to the start technique for the team event, which happen to be quite similar.

Barnert has invested a lot into learning about the luge start. He understands the skill including the mechanics of pulling and the postures and positions needed for a good start. “With my knowledge of luge starts over the past nine years I have been able to identify key positions and principles that carry over to the alpine and ski cross starts,” explains Barnert. “With this as a base, we were able to get a number of quality days of start training this past summer.”

The alpine athletes have had numerous opportunities to compete with the gated start over the past two years but this was the first summer that it was made a priority for the identified team event athletes. “With each athlete, we addressed a goal for each start session where I wanted them to find the solution to the problem that we set out,” says Barnert. “Some athletes were able to find the solution faster than others.”

This kind of thinking, creative and resourceful, was necessary for the team to get on snow and put Barnert’s expertise to good use. “Due to the great support of the WinSport staff we were able to pull starts this summer with snow,” says Barnert. “This is as close to a similar training environment as the athletes will see without being on a ski hill.”

“It was old-school,” exclaims Matt Jordan, Head of Sport Science for Alpine Canada and CSI Director of Strength & Conditioning, “and not very high tech, but it was all about doing everything we can with the resources that we have to maximize our time and chances for success.” Barnert agrees, adding, “We took the approach that we were going to attack this summer and do whatever we could even if it wasn’t perfect.”

Canada won a silver medal at the 2015 World Championships in this event and Barnert thinks they have a chance in Pyeongchang.

“I think the team is in the mix,” he says. “They have shown they can be successful in the past with a previous world championship medal. The start is very critical as you don’t want to give up time to your competitor in an event that can come down to the hundredth of a second.”