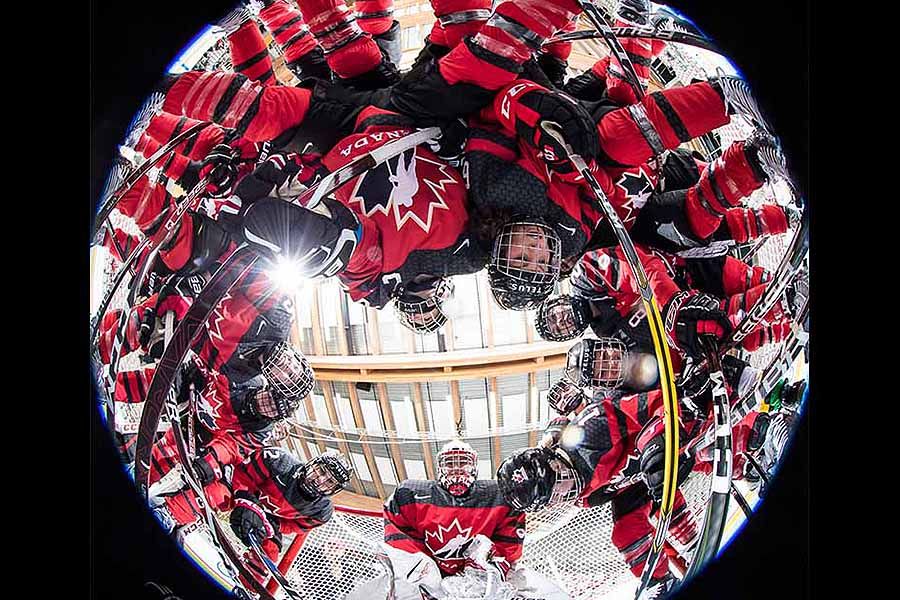 With the hope of hockey gold once again heaped upon their shoulders, the Canadian women’s hockey team centralized in Calgary this Olympic season.

To achieve this end, no stone was left unturned and helping the team work towards their goal was Dr. Cari Din, Leadership Expert for CSI Calgary’s Advanced Coaching Diploma and Leadership Instructor at the University of Calgary. Din facilitated an intensive leadership workshop with the team in August 2017 as they launched their journey to Korea.

The Game Plan Leadership Series, comprised of five three-hour sessions, was a unique opportunity for Din to deliver a concentrated and demanding course that helped the players develop leadership skills they could use within the team and in their lives outside and after sport. The course also highlighted CSI Calgary’s ability to deliver education programs to its athletes that extends beyond the traditional learning environment.

There were no lectures, assignments or exams, however by all accounts the outcome was a deep understanding and application of leadership. In the absence of those traditional modalities, Din says instead there was the expectation of frequent self-reflection that eventually led the women to share with each other how they were going to lead.

Forward and first-time Olympian Bailey Bram says the sessions allowed the team to dig deep and get to know one another beyond the surface level. “Everyone was forced to step outside of their comfort zone and open up with one another about things that they usually wouldn’t share, which ultimately led us to grow closer as a team and start centralization off on the right foot,” she says.

Course content focused on areas such as establishing core values, communication, conflict, culture and crafting a team leadership manifesto. The course taught the women how to have difficult conversations, use each other’s strengths to delegate workloads efficiently, get to know their teammates better, criticize positively and hold others accountable.

“I tailored the course to these women and put a lot into it because I wanted so much for it to make a difference,” says Din. “It was a privilege to be a part of their world.”

What struck Din was the intensity of the sessions and fierce commitment the women showed to one another. “There wasn’t anyone in the room that stood back and said they didn’t want to be a part of it,” she says, adding, “it’s risky to be vulnerable in front of a group, but you need that to be successful.”

Bram says the big difference for her was how Din enabled the players to be okay with that vulnerability. “Cari forced us to get up, open up, share our most difficult moments, share our proudest moments and just really get to know the people in the room,” she says.

Observing the players engage in the Leadership Series was also a reminder to Din that Olympians truly are a different type of person. “It’s their ability and commitment to attend to every single detail, consistently,” she explains. “All of those minute details are not in the line of sight of the average person.”

That attention to detail, in this case becoming good leaders, has prepared this team well for the exciting journey ahead, and for the one that awaits when the hard work of the Games is done.