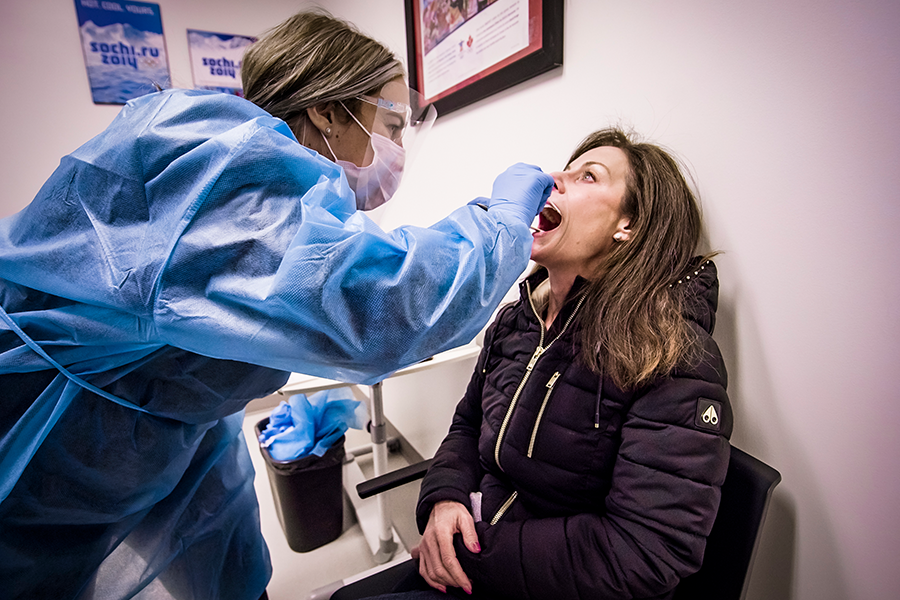 Calgary, February 26, 2021- It stings just a little that Cheryl Bernard can see her own house from her hotel room window, knowing that she is forbidden from returning home for the next six weeks. The 2010 Olympic silver medalist and TSN curling analyst recently spent three days quarantined in that hotel room, barred from leaving its confines to ensure that she is free from COVID-19.

Despite crawling the walls after three days, Bernard says it’s all worth it to bring the sport of curling alive again after a dark year of COVID-19. “The quarantine period was weird for all of us,” she says. “But you know you’re doing it to keep everyone else safe. You feel responsible and you want this to succeed.”

Strict rules and protocols have been devised to follow – by Bernard and everyone else in the Canadian curling universe – to uphold the inviolability and success of the much heralded and anticipated curling bubble.

By mid-summer 2020, Curling Canada could see the writing on the wall – the pandemic would surely not recede in time to resurrect a normal 2020-21 season. Time to pivot.

For the first time ever, it sought proposals from prospective cities that could safely host a lengthy succession of tournaments while ensuring a microscopic virus would not invade the boundaries of a meticulously crafted bubble.

“Calgary was the clear winner,” says Danny Lamoureux, Director of Club Development and Event Operations at Curling Canada. With a location set, the herculean task of planning the bubble began.

A copy of the NHL’s playoff bubble protocols served as a blueprint, while a consortium of stakeholders, including Curling Canada, WinSport, and CSI Calgary, worked together with provincial and federal governments to earn permission to forge ahead. As the pieces fell into place it became clear that many actors would play a role.

“We’re curlers, not medical people,” says Lamoureux. “We had to figure out how to test and where.” That’s when Curling Canada contacted DynaLIFE Medical Labs and partnered with CSI Calgary to operate and manage the testing and screening protocols.

“CSI Calgary has gone above and beyond to make this happen for us,” proclaims Lamoureux. An estimated 2000 tests will be administered to athletes, coaches and volunteers who enter the bubble and CSI Calgary developed a screening app for twice-daily use by all bubble dwellers.

The consequences for breaking the rules are severe – anyone caught not following protocols will be disqualified from competition until after the 2022 season, which means no shot at the Olympics. “So far it’s been magnificent,” exclaims Lamoureux. “There’s a sense of responsibility to everyone else in the bubble, and to think about everyone else coming in after you.”

If all goes according to plan, the bubble will stay afloat for 83 days. Most athletes will enter and stay for 12-13 days at a time. Bernard says some of the athletes are rusty from a lack of on-ice practice and there has been some inconsistent play in the early days. But still, they are all thrilled and incredibly grateful to be here, safely, and relish the opportunity to get back on the ice.

“When they step on the ice, they are home,” says Bernard. “The rest of the time is awkward, but they have to embrace the environment to find whatever positives they can. It’s all about how you frame it.”

After endless months of silent rinks and still rocks, being home, on the ice, even if it’s a strange bubble away from home, is the only place curlers want to be.