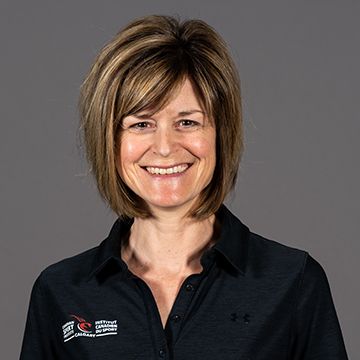 Kelly Anne’s areas of expertise include: training diet, competition nutrition, sport supplementation, adjusting body composition, managing food allergies and intolerances, as well as other dietary constraints athletes may have, such as Irritable Bowel Syndrome. She is always finding new ways to make an athlete’s diet simple yet effective based on an individual basis. She enjoys collaborating with other performance specialists to help understand what athletes’ need in order to achieve excellence.

Kelly Anne was the performance dietitian for team Canada at the 2011 Pan American Games, the London 2012 Olympics and the Sochi 2014 Olympic Games. She works with several national teams such as speed skating, women’s hockey, men’s para-hockey and paralympic cyclists.

Originally from Edmonton, Kelly moved to Calgary after the 1988 Winter Olympics to work as a sport dietitian. Kelly is a 1992 Cycling Olympian from road and track cycling. She is also a proud mother of two active young adults who have had success in both their sport and studies.

Kelly-Anne in the News Scratch lightly at the surface of female sport participation in… Food is good. Good food is better. For tired athletes… The Canadian Sport Institute Calgary (CSIC) athletes are making their… The Canadian Sport Institute Calgary (CSIC) is proud to announce…