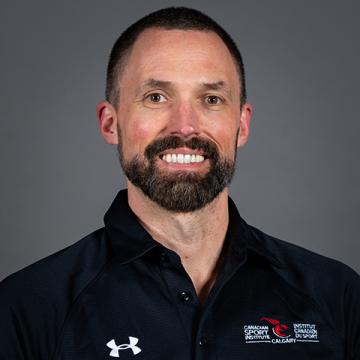 Dr. Matt Jordan completed his Master of Science in exercise and muscle physiology and his PhD in medical science at the University of Calgary. Matt got into research for two reasons: first, because of the importance to have an evidence-based system for athletes to return to sport after injury. Second, because he has always been curious about how things work, and he really enjoys being able to work at the intersection between performance coaching and performance science.

Matt has been a strength and conditioning coach and applied sport scientist working with international athletes for over six Olympic Winter Games. His research focuses on neuromuscular adaptations to resistance training and ACL injury/re-injury prevention in elite athletes. Throughout his career, Matt has consulted with more than 30 Olympic and World Championship medallists, and he frequently provides his expertise to high-performance sport organizations. In addition to being the Director of Sport Science at the Canadian Sport Institute Calgary, Matt is an Adjunct Professor in the Faculty of Kinesiology at the University of Calgary.

Matt is a father of 3 boys and a husband to Nicole. He loves spending time outdoors with his family. Fun fact about Matt is he is a total coffee snob.

Matt in the News Own The Podium Boosts Canada's Next Generation of Sport Scientists

Own The Podium Boosts Canada's Next Generation of Sport Scientists