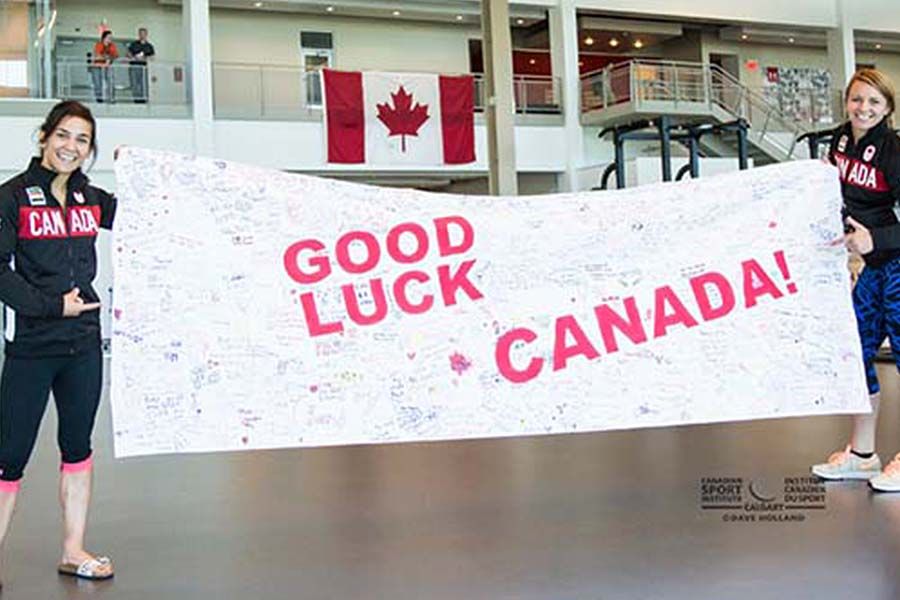 Their bags are packed and they’re READY to go! On Friday August 5, Team Canada will be participating in the Rio 2016 Olympic Games Opening Ceremonies at 5pm MT. Three hundred and thirteen athletes, 98 coaches and 107 support staff from 37 sports make up Team Canada. Eighty one per cent of the Canadian athletes competing in Rio are affiliated with the Canadian Olympic and Paralympic Sport Institute (COPSI) Network.

CSI Calgary is proud to extend a special farewell and good luck to 21 CSI Calgary affiliated athletes in athletics, basketball, cycling, rowing, rugby sevens, shooting, soccer, swimming, volleyball (beach and indoor) and wrestling. Each athlete heads to Rio with their CSI Calgary “Team” beside them in spirit.

Kelly Drager, CSI Calgary Performance Dietitian is also looking forward to her first Olympic experience as she travels to Rio with Wrestling Canada Lutte for testing and collecting data. In weight class sports, there are unique nutritional components that can make or break an athlete’s performance. “I’m thrilled to have this opportunity to see the work we’ve done with the athletes at CSI Calgary over the last four years come together at the Olympics,” says Drager.

Jasmine Mian, female wrestler in the 48kg event, is one of those athletes. "I relocated to Calgary in 2012 with hopes of making the Rio 2016 Olympic team. I always had an Olympic dream, but CSI Calgary helped me turn that dream into a reality,” says Mian. “The CSI staff combined their expertise in wrestling, strength and conditioning, nutrition and mental performance to help me become the best version of myself. I feel very prepared and hungry to reach the podium. I can't thank CSI Calgary enough for helping me realize my podium potential."

A special send-off to two-time Olympic wrestling medalist and CSI Calgary Next Generation coach Carol Huynh, in her role as Assistant Chef de Mission for Team Canada. Carol’s contribution to sport in Canada and her work with the International Wrestling Federation make her a good fit for this role. “It’s a great opportunity for me to be on Team Canada in a totally different way. I can bring my different experiences to the table,” says Huynh.

CSI Calgary would like to thank our funding partners for enabling us to deliver our wide array of leading-edge services to athletes and coaches. We are grateful for their support: Sport Canada/Own the Podium, Canadian Olympic Committee, Alberta Sport Connection, Coaching Association of Canada, Canadian Paralympic Committee, WinSport and the University of Calgary.

They have fire in their hearts and ice in their veins.