Catching Up With Soroka 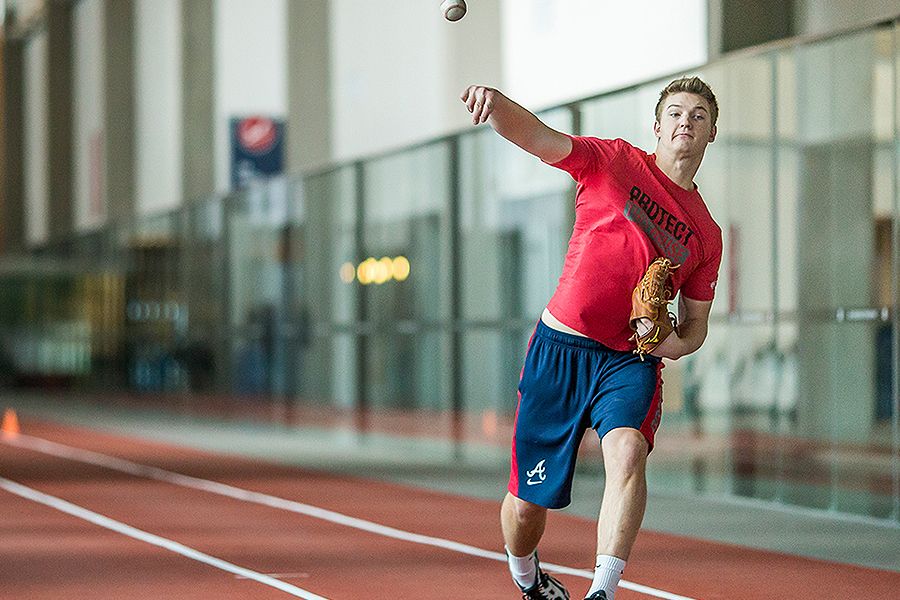 Getting Mike Soroka on the phone during the three short days he was recently in Calgary proved challenging. The 20-year old Atlanta Braves pitcher, home for the All-Star break, was maxed out spending time with his family – a rare luxury now, and fitting in a few workouts at his old Canadian Sport Institute Calgary (CSI Calgary) stomping grounds.

In fact, it wasn’t until early one morning, after a long, indirect, red-eye flight back to Atlanta that Soroka was finally able to talk.

For a writer with a deadline it was a relief, but it also offered a glimpse into the kind of person and athlete Soroka is – extremely polite, confident, grounded, appreciative to everyone who helped him get to where he is today – and one who will make time for an interview to keep his word.

CSI Calgary Head Strength and Conditioning Coach, Jeff Osadec, works with Soroka when he is in town as his strength trainer and catch partner. Osadec, who has trained Soroka for the last couple of years, thinks highly of his young pupil and appreciates his thoughtfulness.

On his first day back, Soroka went in to CSI Calgary and made sure he said hello to everyone. “He really is one of those kids you are super proud of, just a good kid,” says Osadec. “When he got the call to the Braves he made sure to call me and thank me for everything. It was really touching but that’s the kind of guy he is.”

Soroka thinks highly of CSI Calgary in return, saying that it is among the best training centres in terms of size, technology and expertise. “Everyone is extremely dedicated to their athletes and they share common goals to be the best they can be,” he says.

The Calgary native had his first major league start this season and played five games, posting two wins and one loss before being sidelined with shoulder inflammation. He’s been on the 60-day disabled list since June 27th but says the rest is going well and he’s taking the process day-by-day.

Of his first major league start, Soroka, who was drafted 28th overall in 2015, says that even though he was expecting it he still couldn’t believe it was happening. After the first few nervous pitches against the New York Mets on May 1st, Soroka settled in and did his job. “It was the same, but with a few more people and a bigger stadium,” he recalls. “You just have to have the confidence to pull yourself through.”

At just 20, Soroka is the youngest pitcher in the league, and almost the youngest player. That doesn’t mean he’s lacking experience and his confidence is well-earned. “People assume I don’t have experience,” says Soroka. “But I’ve pitched 350 innings in the minor leagues.”

Osadec helped Soroka in the gym with his strength training and says that focusing on the basics was the best thing he could do. “I would like to say we did something revolutionary, but it was really doing the basics very well,” he says. Osadec also kept in mind that Soroka is still young with a long career ahead of him. “When I trained him, the idea was ‘don’t break him’ and when I caught for him it was ‘don’t get broken.’”

Despite the short visit home, Soroka was thankful for the time he could spend with his family, who he says offers him all the support in the world. He’s also thankful for the opportunities that Baseball Canada was able to provide during his development.

For such a young, big star, he’s a pretty thankful guy. Soroka seems to genuinely understand and truly appreciate what he has earned and marvels at just how far he’s come. “You don’t really realize how small a group it is that makes the major leagues.”