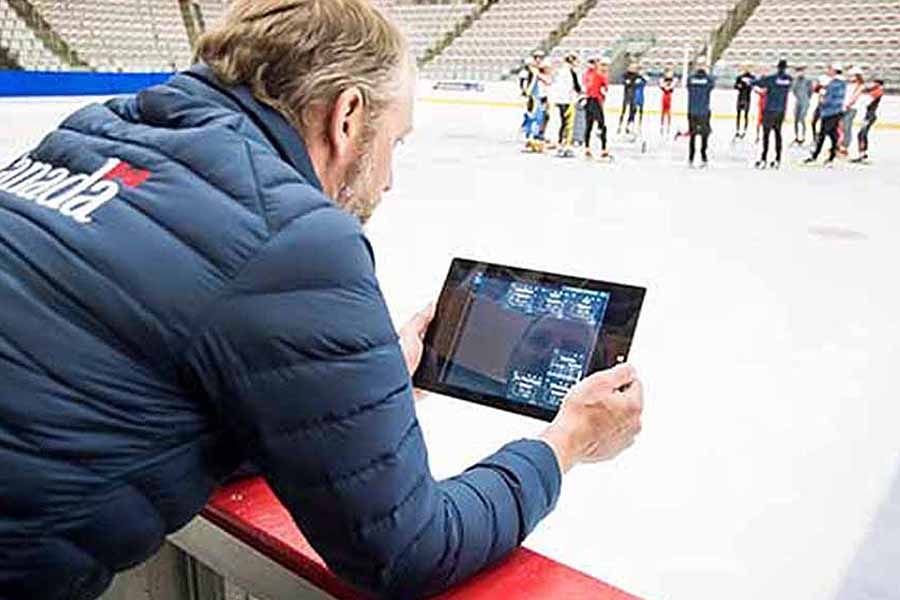 Bloemen won gold and silver medals in PyeongChang, in the men’s 5,000m and 10,000m long-track speed skating events. It was not a fluke that he did so, and Maw and Schouten were invited to speak at the debrief to share with attendees from a broad range of winter sports just how, and why, Bloemen was so successful.

The presentation focused on the periodization of Bloemen’s training plan and using daily measurements throughout the quadrennial, which established critical values that Maw and Schouten were able to use to make important decisions and adjustments to Ted’s training in the final days leading up to the 5,000m.

“It was clear from the feedback we got that people were very appreciative and impressed by how well Bart and I worked together to optimize performance,” says Scott Maw, who is also the Integrated Support Team (IST) Lead for Long Track Speed Skating. “The IST was there to support the coach-driven program not to just do our own thing.”

The purpose of the debrief was to learn from all successes and failures in PyeongChang, with an eye on improving in Beijing four years from now. The key was to share knowledge across sports and the questions to be answered were: what worked, what didn’t, and most importantly, why?

Quipp presented alongside Skate Canada’s High Performance Director, Mike Slipchuk, about the quest to get the figure skating team ready for the team event. It was felt that the team event was a lost opportunity in Sochi (Canada won silver) and that it could have been taken more seriously. The key for 2018 was having the team do whatever it takes to win.

Quipp worked closely with Patrick Chan and Kaetlyn Osmond, both of whom helped Canada win gold in PyeongChang. After some early season struggles, Chan ultimately committed to the event just 12 weeks before the Games began, and Quipp did her best to help get him in shape in time.

“He took on a very structured program and his fitness improved drastically in those three months,” explains Quipp. “He really believed in what he was doing and bought-in completely to what we were trying to accomplish.” Despite the short time-frame, Chan was a key member of the team that brought home gold for Canada.

Quipp was honoured to be invited to present on her experiences with Chan and Osmond. “It shows the value of the work we did, and it was great to have peers and stakeholders come together and ask, ‘How can we learn from this?’” says Quipp. “It was a room full of people that just want Canada to do well.”

Matt Jordan participated in a panel discussion focused on how best to prepare for the next Olympic Winter Games in 2022 in Beijing. “The key for us is to continue to enhance our ability to track and profile the single athlete over time,” he says. Adding, “the sky is the limit in terms of how we might use the data to improve performance.”

All three CSI Calgary staff were pivotal presenters at this year’s OTP debrief, exemplifying the calibre and quality of their work. Way to go team!