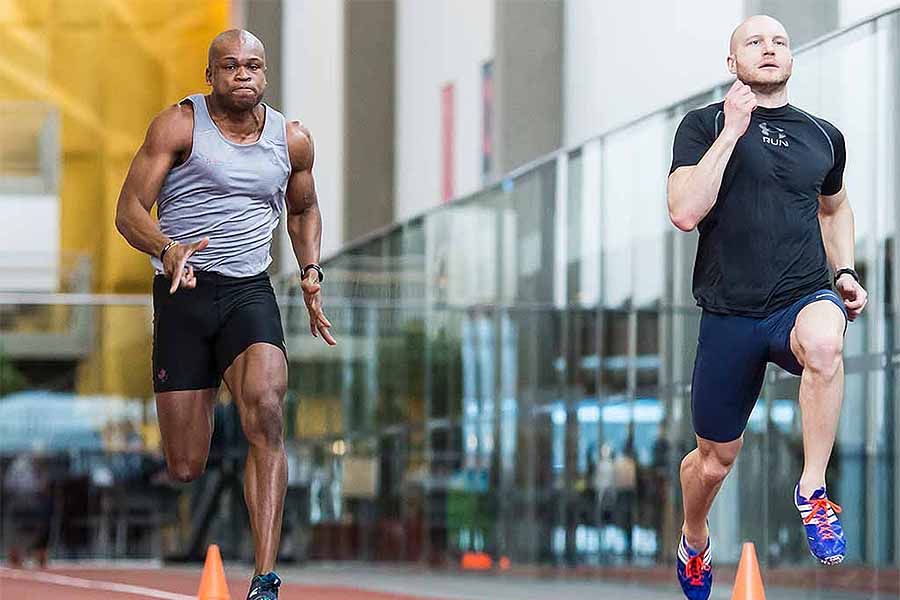 Bobsleigh, they say, is an old man’s, and woman’s, game. That’s because most bobsledders don’t come to the sport as youngsters, but rather end up there after a career in another sport altogether. Track and field, football and rugby are sports that frequently pump out one great bobsledder after another, but it’s not by chance – it’s by design.

In the early days of course, it was a fun way for sprinters to try something new and different, even Donavan Bailey tried it way back in 1993 before he became the fastest man on earth. But now it’s a proven strategy for producing world-class bobsledders and CSI Calgary is part of the game.

Quin Sekulich is a Head Strength and Conditioning coach at CSI Calgary and he’s the catalyst responsible for recruiting several former sprinters and running backs to bobsleigh. During his time as a track and field coach at the University of Alberta he sent a few sprinters to the bobsleigh program and their success paved the way for Sekulich to become a coach with Bobsleigh Canada and now CSI Calgary.

What makes Sekulich such a successful recruiter is his background in track and field, and his expertise in sprinting. “My strategy is what I call ‘Blue-Chip recruiting,’” he explains. “It’s not a cattle-call for guys to sign up but rather targeting athletes that I think would transfer well into bobsleigh.”

Sekulich says the idea is for these athletes to finish their sport first, be it track and field or football, but then come to bobsleigh after. “The men can be competitive into their late thirties and even early forties,” he says. “Lascelles Brown is 43 and heading to his fifth Olympics.” He is also pragmatic about the idea of talent transfer to bobsleigh. “It’s a quick switch,” he asserts. “If you’re big enough and fast enough you can do it.”

One former sprinter Sekulich recruited recently made the switch and it was indeed very quick. Seyi Smith, 30, only came to bobsleigh in earnest in September of 2017, and he’s already on his way back to the Olympics.

Smith competed for Canada at the 2012 Olympics in London – most Canadians will remember him for the tears streaming down his face after he realized his 4 x 100m relay team had been disqualified in the final for a lane violation – they lost the bronze medal. It was a heartbreaking moment.

That disappointment is still with Smith, but he doesn’t dwell on it. In early 2016, Sekulich brought him to the ice house for fun and to show him around. He pushed a 5.16 (start time) the first time he touched a sled (the standard is 5.15, and he now runs a 5.01).

“I knew right away this guy was going to be good, but I didn’t want to pressure him,” says Sekulich. “I wanted him to come in on his own.”

Smith says he wasn’t happy with how his track career ended, and he wanted to prove to himself he could still perform at that level. “I missed the high-performance training and that drive for a singular goal,” he says.

Making the switch to bobsleigh was the next step, at the right time. “I was already doing the training with Quin and had the physiological requirements for the sport,” notes Smith. “The only thing I had to worry about was how to get into the sled.”

The switch paid off and now Smith, after just a few months in the sport, is a brakeman ranked fourth in the world with pilot Justin Kripps in the four-man event. He’s pushing for Canada again in PyeongChang and Sekulich says they have a good chance. Not bad, eh?

With his Blue-Chip recruiting strategy firmly in place, it is certain that Sekulich will continue to find and recruit a steady stream of high-caliber athletes to fill big shoes on Canada’s lightning fast bobsleigh team.