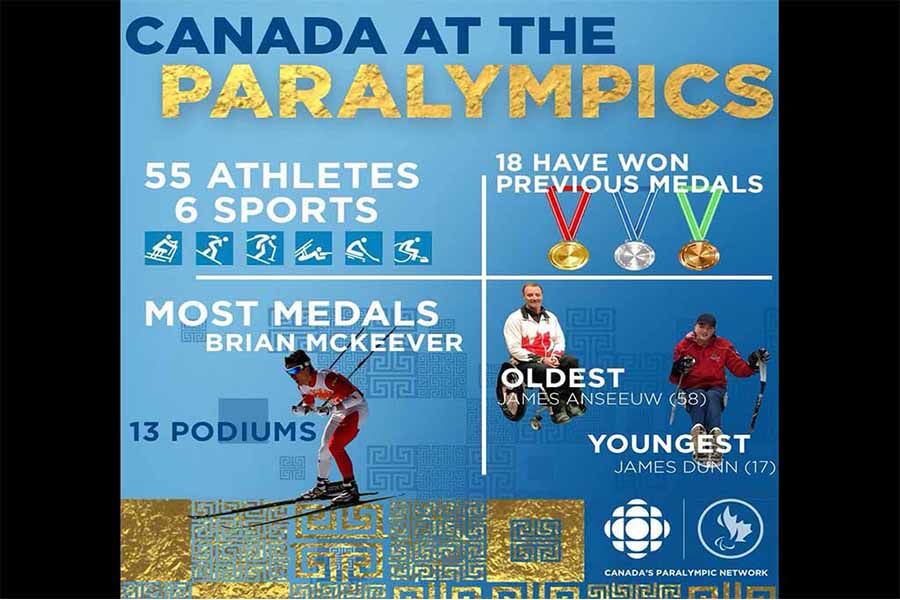 Calling all sports fans! If you thought the 2018 Olympic Winter Games in PyeongChang were awesome, prepare to be blown away once again when the Winter Paralympic Games launch on March 9, featuring competition across six sports. Canada’s best Paralympians will take on the world in alpine skiing, para ice hockey, snowboard, biathlon, cross country skiing and wheelchair curling.

Not only will their athletic feats amaze you, but the human stories behind the performances of these Paralympians will inspire you in ways that you can’t even imagine.

Take Mark Arendz, the 28-year-old Nordic skier heading to his third Paralympics. He lost his left arm in a farming accident at age seven but he never let that slow him down. The two-time Paralympic medalist from 2014 has become a regular fixture on the World Cup and World Championship podium and he’s is in the hunt for more hardware in cross-country skiing and biathlon.

And then there’s the inexhaustible Brian McKeever, winner of 13 Paralympic medals in cross-country skiing, including 10 gold – the most victories ever by a Canadian winter Paralympian. McKeever was diagnosed with Stargardt disease at age 19, resulting in deteriorating vision from a form of macular degeneration. He made history in 2010 when he qualified for both the Olympic and Paralympic teams. At age 38, he’s still going strong.

In PyeongChang, McKeever will pair up with cross-country skier and guide Russell Kennedy, another Canadian Sport Institute Calgary (CSI Calgary) supported athlete, who recently competed at his first Olympics just a few weeks ago.

CSI Calgary is well represented on Team Canada at the 2018 Paralympics, supporting 25 of the 55 athletes, all in para ice hockey and para Nordic (cross country and biathlon). It will also be present on the support staff for these two sports as training group agreements with CSI Calgary have led to significant support in areas like physiology, strengths and conditioning, nutrition and mental performance.

CSI Calgary staff heading to PyeongChang for the Paralympics include Jess Kryski and Bryan Yu. Kryski is the lead physiologist for the para Nordic team and Yu works closely with the para ice hockey team as the head strength and conditioning coach. Their work has been instrumental in helping Canada’s top para ice hockey and para Nordic athletes optimally prepare for the Paralympics.