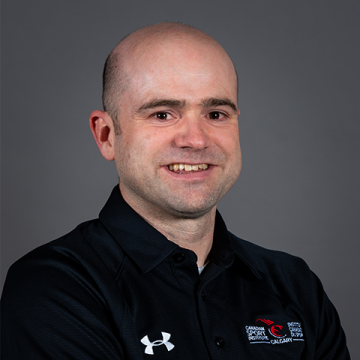 Mark completed his Master of Science in physiotherapy in 2011 from the University of Alberta. He also holds certifications in spinal manipulation, anatomical acupuncture, and functional dry needling. Mark is a former long track speed skating national team member. He suffered a significant knee injury during his career and received quality care that allowed him to successfully return to sport. This motivated him to stay involved in high performance sport and help others accomplish their goals while representing Canada.

He began his career working in private practice orthopedics and neurorehabilitation at the Foothills Hospital. In 2014, Mark joined the University of Calgary Sport Medicine Centre and went back to his roots as he joined the speed skating team as a member of the integrated support team. He has provided care to junior and senior speed skaters at numerous World Cups and World Championships. Mark’s expertise includes hip, knee and return to sport rehabilitation as well as manual therapy.

Mark is originally from Saskatoon Saskatchewan and moved to Calgary in 1998 to train at the Olympic Oval. He enjoys spending time with his wife and 2 young boys, skiing, mountain biking, climbing and cooking.