How dietitians, mental performance consultants and others are tackling the issue of eating disorders in sport 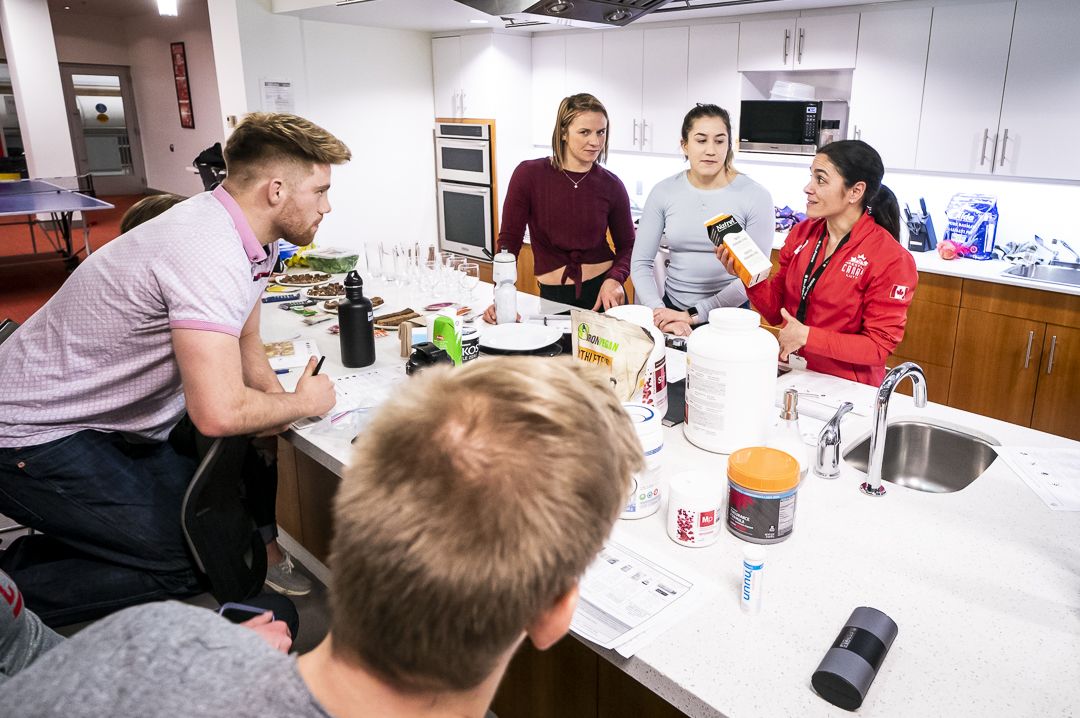 By Teddy Katz for the Canadian Olympic Committee

Warning: This blog post covers a subject and situations that can be distressing or triggering. A Canada-wide helpline and chat support are available 1-866-633-4220 from the National Eating Disorder Information Centre.

Athletes have a unique relationship with food and what they put in their bodies. They know proper nutrition and adequate fueling is important for their performance and well-being. But focusing too much on their bodies and their weight, in particular, can lead to big problems.

Kelly Drager, a performance dietitian who works at the Canadian Sport Institute Calgary, says it’s heartbreaking to hear some of the stories of what athletes go through. She says it’s important to normalize the conversation, so athletes know there’s help out there.

“These stories need to get the attention to have people talking about it, including those at the decision-making level for education, support and funding for mental health and nutrition.”

Drager says trying to diagnose someone with an eating disorder can sometimes be difficult. Athletes sometimes may not seek support. They might not even realize they’re experiencing challenges or sometimes are ashamed about what they might be going through. So, Drager says a team she’s part of at the Canadian Sport Institute in Calgary tries to proactively identify athletes in need of support.

For instance, the interdisciplinary leads (physicians, physiologists, mental health practitioners, strength and conditioning coaches, therapists, dietitians) at the Canadian Sport Institute in Calgary have collaborated on a baseline screening process for the national team athletes they assist. They refer to this as the intake process.

It starts with the athletes completing a medical screening questionnaire, which includes 10 questions about their eating behaviors and habits, and whether they’ve ever been diagnosed with an eating disorder. The intake also includes a mental wellness screen and nutrition questionnaire. That questionnaire assists in determining their fueling needs and if any food restrictions are happening. The team puts together a risk assessment for each athlete and a care plan if an athlete’s tests show cause for concern.

Then the team builds a treatment program for each individual. A program could be for days, months or even years, depending in large part on the root cause of what the athlete is dealing with.

In some cases, the support team working with athletes say a person with an eating disorder might have a concurrent mental health issue. There might be a history of abuse, trauma, depression, or relationship or family issues.

Other times, the issues can surface from poor coaching methods, bullying or body shaming. The athlete’s thoughts, feelings and perceptions about their body can be what leads to the disorder.

Judy Goss has worked for years as a mental performance consultant in sport. She says sometimes people think if someone is thin, they might have an issue. But she says it can happen to anybody and sometimes what makes a “good athlete” can blur the line between being dedicated and having poor body image or worse.

“Sometimes an athlete is willing to go above and beyond. They’re willing to do anything that the coach asks. They train hard. They follow instructions. They accept nothing but perfection. Those kinds of characteristics also can make you prone to eating disorders. We have to realize that it’s sometimes right in our face and we don’t see it.”

Goss says young athletes today face a new challenge: social media. She says that intensifies the issues around body image and eating disorders. Athletes, she says, just like everybody else might compare themselves to others or find themselves the subjects of harsh words or body shaming.

Often, mental performance experts say eating disorders start when someone is in their early teens and their bodies might be changing. That makes early intervention in sport extremely important.

That’s why Drager has worked with Goss and Skate Canada, where Goss is the mental performance advisor. Together, they produced Body Positive Guidelines, in December 2020 to share with coaches, parents and guardians, and young figure skaters in the sport.

The guidelines highlight how important it is for coaches, parents and others around athletes to be mindful of the language used toward an individual and about their body.

“There's always that one statement that you're never going to forget. We kind of call it a Velcro statement that always sticks with you. Coaches or parents might say, wow, you look awesome, you're so lean. Those positive comments can be just as detrimental as someone saying you're overweight,” Goss says.

Drager and some of the team at the Canadian Sport Institute in Calgary facilitate education sessions with coaches and athletes where they sometimes will role play. If an athlete says “I’m too fat,” they’ll ask the coach to consider what would be an appropriate response.

Coaches are told to focus on performance and fitness rather than appearance and weight. For instance, look at what the body’s doing to power the movements rather than how it looks.

Drager and Goss are working on a pilot project for Skate Canada. Later in 2022, they’ll hold workshops around the country with some skating clubs. They’re planning to introduce these Body Positive Guidelines to everybody at the club as well as to the young skaters.

“This is just the first step,” Goss says. She adds, “talking about body image in sport is long overdue. That comes from every aspect, whether it be the coaches or judges in certain sports. We need to realize that body shape and size does not predict performance.”

Teddy Katz is an award-winning journalist and communicator. He worked as a national sports reporter at the Canadian Broadcasting Corporation for close to 2 decades. Teddy now runs his own communications company, Think Redefined Inc., where he assists national and international organizations with their storytelling. That includes the Canadian Olympic Committee and the International Paralympic Committee. Teddy was in Tokyo as the media attaché for the Refugee Paralympic Team.