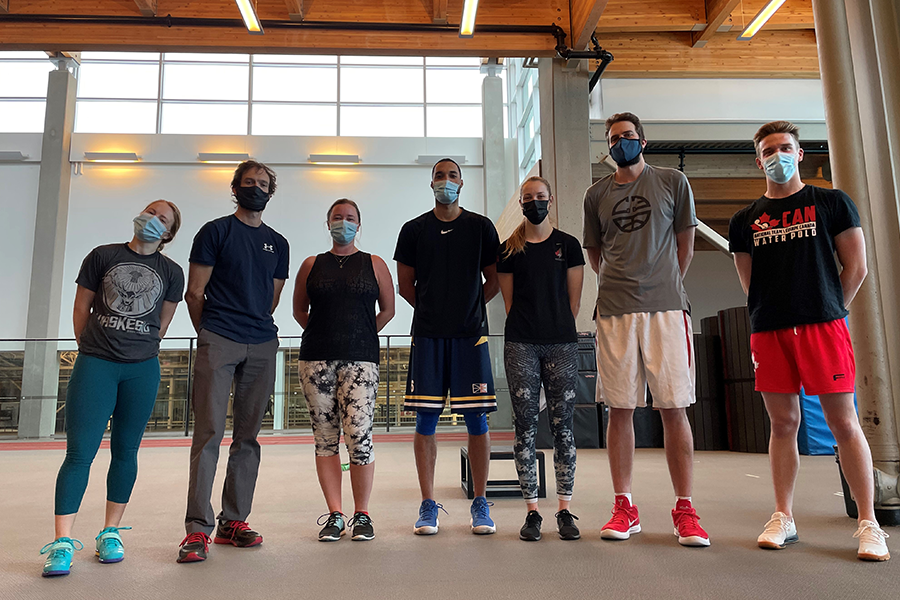 Calgary, February 20, 2021 - Even before the global pandemic hit, curler Chelsea Carey had already planned a year off. As a new free agent without a team there was no schedule or competition to plan for, and a nagging knee injury was ever present. The decision to step back was clear and final.

Still, as she stared down the abyss of an empty season, the two-time Scotties champion skip knew it could be a tough year.

When COVID-19 began circling the globe and mass lockdowns followed, CSI Calgary charted a new course, planning protocols and adapting training groups so that athletes could safely resume training. Along the way, they ended up with a random assortment of athletes from different sports who didn’t have anyone to train with, so they created a new cohort that could train together. This is where Carey found her team.

It was an eclectic mix of athletes from alpine skiing, fencing, water polo, basketball and curling. CSI Calgary Strength and Conditioning Lead, Jeremiah Barnert, who trained the group, says the idea was borne out of the need to continue providing services that the athletes rely on to achieve peak performance.

“We were trying to find creative ways to support athletes during the pandemic,” he explains. “This cohort came together because they were all on their own and needed our help.”

The first step for Carey was addressing a long-standing overuse injury in her knee that she couldn’t resolve as competitive seasons grew ever longer. “We started by working on musculoskeletal issues,” says Barnert. “But we had to be creative with home-based workouts and even with the in-person workouts. I was prescribing workouts using soup cans and milk jugs,” he laughs.

Teaming up with Barnert gave Carey the one-on-one attention she needed to finally put the work in to recover. “It’s not quite where I want it to be, but we’ve made progress,” she says. “It’s still tough though, I had to be patient, which is something I’m not very good at.”

What Barnert observed goes deeper. “For Chelsea what has been really good is the consistency in working to rehab her knee injuries,” he says. “It’s been a blessing for her, and she’s taken more ownership to address these issues. The team environment really helped her, too.”

That team environment emerged after the group met for training and began to bond. It became a safe harbour where they could work towards their own goals together, in an ever-changing pandemic world that kept closing in.

“It kept us sane just being able to train and have a group of friends,” says Carey. “Getting together for workouts was also the only social interaction we had.” In some ways, it’s been a silver lining, finding this team, this year.

So, when Carey got the unexpected call to join Manitoba’s Team Fleury at the upcoming Scotties Tournament of Hearts to fill in for skip Tracy Fleury, who is home caring for her daughter, she felt as prepared as she possibly could be.

In a year that was supposed to be lost, Carey has another shot, an opportunity she’s excited about but nervous, too. “Everyone is coming in a bit rusty,” she says. “The pandemic levels the playing field somewhat, but it’s still nerve-wracking knowing the preparation on ice hasn’t been there.”

Just before the second major lockdown in Alberta came in mid-December, and the mismatched team knew they wouldn’t be able to train together for a while, they took a group photo: a true team of misfits who came together and found what they needed to get through a tough year. No doubt a time that will be looked back on with fondness as they eventually make their way back to normal.

Carey sums it up, “It’s been a bizarre year, but it’s been fun.”

The Scotties Tournament of Hearts kicked off last night at the Markin MacPhail Centre at Winsport and runs until Sunday, February 28th. For complete information on the event, visit https://www.curling.ca/2021scotties/

613-262-9644 This email address is being protected from spambots. You need JavaScript enabled to view it.